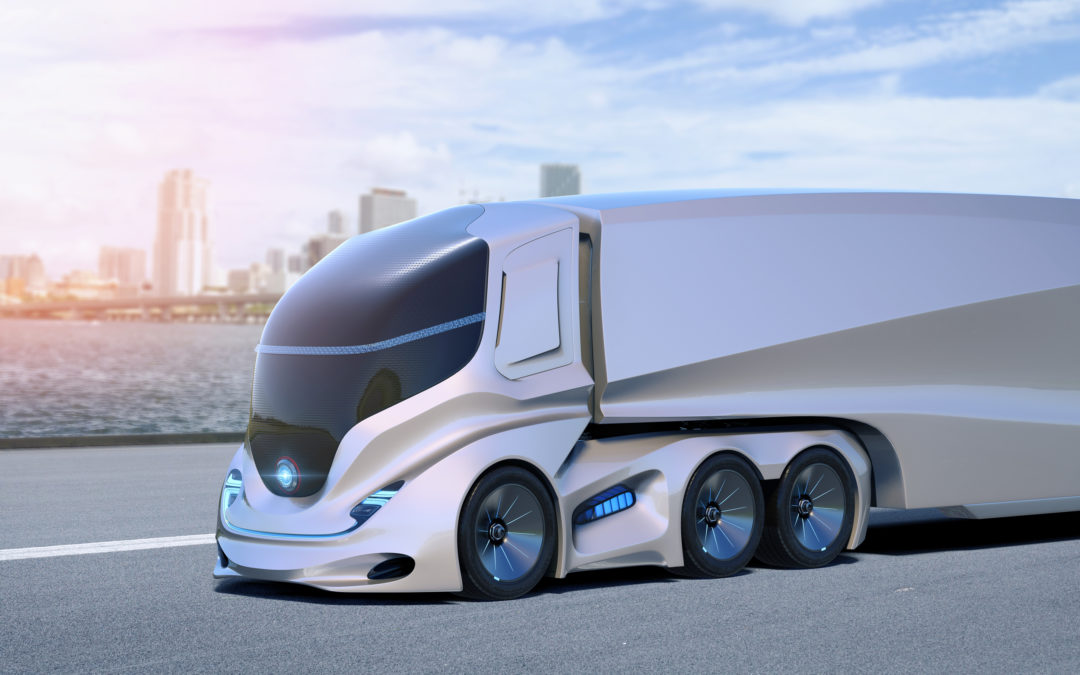 Self-driving vehicles are getting a great deal of attention these days. Self-driving cars have now driven millions of miles on our roads, and self-driving trucks are close behind—figuratively speaking. Earlier this year, a Peterbilt truck made news by driving itself from California to Florida. It covered the 2,400 miles without input from a human driver and without incident.

Clearly, the time is coming when companies will load up their semi trailers with goods and send the truck on its way with nobody in the cab. Between now and then, maybe a driver rides along just in case, but that person can be doing other work while the rig’s sensors and artificial intelligence (AI) keep it safely on the road.

What does the coming of self-driving trucks mean for truck drivers? What does it mean for companies that ship their products or materials using their rented or leased semi trailers? Time will tell.

How Do Self-Driving Vehicles Work?

As self-driving vehicles move from science fiction to everyday reality, it’s important to understand how they work. Many companies like Tesla, Google, Uber, Nissan and most other major automakers are working on perfecting self-driving technologies. Each has their own approach to helping vehicles analyze and understand their environment as they travel.

Generally speaking, self-driving vehicles create and continually update a map of their surroundings. They do this using input from sensors that leverage a wide-range of technologies including high-powered cameras, radar, lasers and sonar. These sensors must, of course, detect everything that a human can detect: other vehicles, pedestrians, inanimate objects, etc.

The input is then processed by software that determines the vehicle’s path and provides instructions to what are called “actuators.” These devices control acceleration, steering and braking. AI is used as part of this process to make interpretations that help the vehicle navigate. For example, self-driving trucks “understand” the difference between a motorcycle and a bicycle, and how that difference affects traffic rules such as the fact that a bike traveling beside the road can be passed whereas the truck must remain behind a motorcycle.

All of this technology helps vehicles reach different levels of autonomy, which researchers define as:

A New Dynamic is Coming for Semi Truck Drivers

According to the U.S. Bureau of Labor Statistics, there are more than 1.7 million heavy-duty and tractor-trailer truck driving jobs in the U.S. today. Plus, there are at least that many people who drive delivery vehicles, buses and taxis for a living. Should these drivers be looking for new jobs? It depends on who you talk to.

The president of the American Trucking Association has said that he thinks it could be decades before fully autonomous commercial trucks are used. And he’s not alone. When speculating on the future use of self-driving semi trucks, many feel the big rigs align more with aircraft than cars. Few experts believe commercial flights will take place without a pilot anytime soon given the complexity of flying a plane and what’s at stake in terms of passenger safety.

While semi trucks don’t carry passengers, their size and the many variables involved in operating them do put other drivers and pedestrians at risk. If a rig’s “autopilot” fails, significant harm and property damage could follow. So, from that perspective, it’s likely that there will be a driver onboard for the foreseeable future to provide human oversight for the vehicle’s operations.

Plus, the interaction between a driver and the team at the company site where a shipment is received can be an important part of the business relationship. This is something that the most advanced self-driving truck can’t handle!

In addition to the challenges associated with operating self-driving semi trucks and trailers, there are many other factors affecting their use. For example, more laws will have to be written and approved regarding the wide-scale implementation of autonomous semi trucks.

Questions like, “Who is responsible if a self-driving truck injures someone or damages property?” will have to be answered at the many governmental levels where these issues are addressed. Until then, restrictions that have been lifted on self-driving cars in many instances will still be in place for trucks.

Plus, regulations on things like the number of hours worked by truckers will have to be considered. And these are complex conversations involving a wide range of stakeholders including legislators, regulators, trade organizations and others.

Eager to embrace the efficiency of self-driving vehicles, some companies are considering or acting on intermediate steps toward full autonomy. For example, some are exploring the idea of “platooning” in which automated trucks follow a lead truck operated by a driver.

Others are looking into having trucks operate in self-driving mode on highways, where there are fewer challenges, but then being boarded by a human driver after leaving the highway and before heading into more congested city areas. A driver may also be used in situations where bad weather is expected or other unusual circumstances may be encountered.

Whatever the steps and whatever the pace, there seems to be no question that semi tractor trailers will eventually be piloted by sensors and AI.

If you have questions about our inventory of trailers for rent, lease or sale, or our company in general, our fully human team at Boxwheel is happy to talk with you! Please contact us at your convenience, or stop by our Colorado or Arizona location for a cup of coffee.